Why triathlons are booming

One of the most interesting sports phenomena of the past few years has been the new boom in triathlon, with race participation in the UK showing an increase of more than 300% in the past 5 years!

Triathlon is, of course, a new sport, with the first recorded triathlon only taking place on September 24, 1974. It was organized by the San Diego Track and Field Club at Mission Bay, and consisted of 5.3-mile run, a 5-mile bike ride, and a 600 yard swim in the ocean. 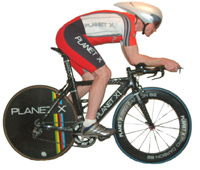 Just a few years later (1978) the first Ironman race was held, capturing the public's attention and starting the first triathlon boom. The sport is now showing huge growth worldwide, with the Olympic races from Sydney and Beijing being among the most watched events on the Olympic calendar. The ITU (International Triathlon Union) now sanctions over 100 events worldwide every year, with the 2009 World Cup series including 12 events in major cities and destinations around the globe.

Here in the UK, the London Triathlon has grown from 1,000 to 11,000 competitors in just over ten years, with organizers reporting that more and more people are signing up every year.

So why is triathlon so popular? To the casual observer it can seem like a torture fest - particularly when you see TV coverage of an Ironman race - so why do so many people do it? There are several reasons.

Surprisingly, you don't have to spend hours every day training in order to complete a race. There are races of all different lengths, and if you choose a short race, you can dip your toe in the water with as little as four to six hours of training a week. Why not give it a go?