The Grapefruit Diet also known as the Hollywood Diet, was originally developed in 1930s Hollywood. 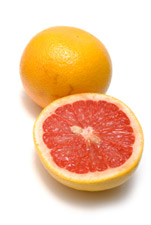 The original Grapefruit Diet, the basics of which are detailed below, is an unhealthy, ultra low calorie plan, and not recommended.

However, a 2004 study led by Dr. Ken Fujioka at the Nutrition and Metabolic Research Center at Scripps Clinic found that simply adding half a grapefruit or a serving of grapefruit juice to each meal resulted in an average weight loss of around 3.5 pounds over 12 weeks.

This appears to be due to grapefruit’s ability to reduce insulin levels. For those interested, here are the rules and meals for the original 1970s plan.

Rules for the grapefruit diet:

The following page will give you a sample weekly menu for the grapefruit diet.