The food pyramid is a pyramid shaped symbol that helps promote healthy eating by teaching people which food groups should be consumed each day, and also what foods to avoid. 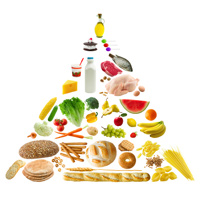 This pyramid diet is not so much a diet, it is more an easy method of showing people what food groups they should aim to base their meals around.

This method works on suggesting that a low fat, high carbohydrate diet will work best for those wishing to lose weight, as they are only consuming calories from healthier options rather that high fat foods.

Due to a calorie being a calorie, this method has not really worked, as most people simply eat far too much of the so called good foods.

This is a very old method of weight loss, one that 20 years ago people would think would cure the massive increase in obesity in the western world. WRONG it does not work, there are more obese people per percentage of the population, and this figure keeps rising.

Yes, certainly look at eating healthier low fat options, but check the calorie intake in the form of hidden sugars.

A bowl of healthy, high fiber cereal with a sliced banana and low-fat milk plus a slice of whole grain toast with marmalade.

A bowl of cooked porridge with raisins and wheat germ, served with low-fat milk, plus a slice of multi grain toast with fresh sliced tomato and chopped basil.

An apple, a boiled egg and a slice of whole meal toast with a little low-fat spread and marmite.

A small bowl of fresh fruit salad with some non-fat yogurt.

Baked beans and grilled tomatoes on toast plus a glass of low-fat milk.

Lunch does not need to be large, a whole meal bread sandwich with a suitable filling: turkey, chicken, salad, tuna.

Water based soups with a whole meal roll.

Try to maintain a protein-based meal at dinner as latest research shows this can reduce the rate at which your body stores fat.