Have you tried kettlebell training? It’s hard to avoid it these days. Rocky was seen using them in his latest film, while they were also used as a key element of the training for the cast of “300".

Kettlebell training has become a major part of the workout regime for athletes, film stars and the military, but they aren’t just for elite athletes or the rich and famous. In fact, kettlebell training is one of the most effective ways of getting in shape. 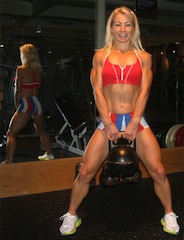 The success of kettlebell training rests on one simple fact – it works! Whether you believe that this form of training originated in Scotland or in Russia (both countries lay claim to it), it is the Russians who have been responsible for taking kettlebell training and developing it into a highly technical and demanding form of exercise. Let’s look at what makes these workouts so effective:

It’s a full body workout: Kettlebell training focuses on three main lifts - the swing, the snatch, and the clean and jerk. What all of these lifts has in common is that they work the body as single unit. In each lift, power is generated from the legs, progresses up through the hips, and is finally expressed through the arms. Unlike many “traditional” weight-training moves, your muscles aren’t working in isolation, and your core is always in play.

It develops power: Again, traditional weight training focuses on pure, static strength. That’s great in the gym, but often doesn't transfer well to the sports field – or real life. Kettlebell training is fast, explosive, and thus trains your fast twitch muscle fibres. As a result it develops power – the ability to apply strength at speed. That makes it a really functional way to train.

It works your big muscles: Watch anyone using kettlebells and you will immediately see how much force is generated from the hips. You hips, legs and butt are the strongest muscles in the body, and also the ones that take the most out of you when you work them hard. Kettlebell workouts hit the hips, glutes, hip flexors, abdominals and erector spinae, which translates directly into improved athletic performance.

Improved grip strength: Holding onto the kettlebell as it swings around requires focus and concentration – and a strong grip! Grip strength can ultimately be a factor in many sports and some strength training exercises – kettlebell training is a great way to improve grip strength.

Intensity: Ever seen guys at the gym, lolling around on the bench waiting several minutes for their next set? You’ll never find that happening in a kettlebell workout. This is intense training, and it will develop strength, endurance and cardiovascular capacity to extreme levels. Proper kettlebell training doesn't use sets and reps, but focuses instead on a quantity of work in a specified time – thus you are always striving to complete the work and beat your PB.

It’s fun: If you can take hard work, you’ll enjoy it. There’s something primal about slinging this huge chunk of iron around above your head that gets the adrenaline flowing. You’ll sweat, you’ll swear, but you’ll also get in shape – fast!